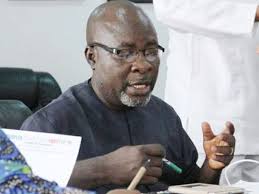 The main opposition party in Nigeria, the people’s Democratic Party PDP, has asked president Buhari to speak up on the issue of financial scandal involving officials and individuals close to him.

The party said president Buhari can no longer keep quiet in the face of allegation that some people close to him are involved in the fraud up to the turn of N51 billion, the party also alleged that N2.5 billion of the money was wired to members of the president immediate family.

The alleged financial scandal was contain in a statement tittle, “PDP Calls out Buhari Presidency on Corruption…Tasks PMB to speak out on alleged N2.5bn Transfer to Family Member,”

The statement was signed by the party’s National Publicity Secretary, Kola Ologbondiyan, in Abuja.

The party said this latest scandal of massive looting allegedly involved close aids to the president, has further exposed this administration as a putrid citadel of corruption.

Ologbondiyan said, “The PDP tasks the Buhari Presidency not to keep quiet but offer explanation to allegations in the media space that certain officials and individuals close to the Presidency defrauded our nation of the sum of N51 billion out of which N2.5 billion was wired to a member of Mr. President’s immediate family.

“The Buhari Presidency should not pretend not to be aware that the media is awash with reports that a known confidant of Mr. President and certain officials of the Nigerian Customs defrauded our nation to the tune of N51 billion under a hazy “Revenue Assurance Fund”, out of which N2.5 billion was reported to have been transferred to a foundation allegedly owned by a female member of the President’s immediate family”