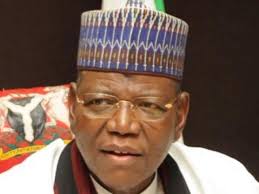 The former governor of jigawa state said after the exist of president Buhari comes 2023, the All progressive Congress (APC) will go into extinction, as the current president will not support the candidacy of senator Ahmed Tinubu in 2023, presidential elections

He made this known in the inauguration of the Jigawa State People’s Democratic Party PDP reconciliation committee in Dutse.

According to him, he said the whole of APC is built around the person of Buhari and Tinubu, that when these two personalities are out of the picture, the rest will be history.

He said the aftermath of the APC extinction, it does not automatically give the PDP the national victory, he said is far from that, unless the PDP members unite in oneness, and come together as one indivisible political party.

“We must forget all our grievances, set aside all our personal interest for us to win because it’s only PDP that can be able to rule this country” he stated.

He charged the members of the reconciliation committee to be just and fair in their approach to aggrieved members.

He further make a personal appeal to aggrieved members to put their grievances apart for the interest of the party and uphold the party interest before their personal interest, for the victory of the party and the generality of Nigerians who are looking towards the party’s direction for proper governance.