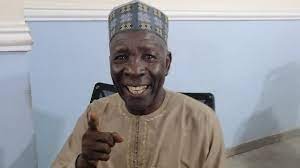 Buba Galadima stands tall among the most ferocious critics of the President Muhammadu Buhari administration. In the buildup to the 2019 general elections, he led some dissent elements within the ruling All Progressives Congress (APC) to the opposition Peoples Democratic Party (PDP) and fiercely fought to see to the end of what he decried as bad governance. However, having lost faith in the two platforms, he has changed the tune, singing a different song.

In this interview, the estranged former associate of the president advocated the formation of a Third Force to lead the country out of the woods.

The security challenges confronting the nation are assuming more and more alarming dimension by the day. What do you think is the way out?

The issue does not need a security expert to tell you whether there is a way out or not. When there is a will, there is always a way out. There is no will on the part of those whose responsibility it is to sort out our problems. Since there isn’t that much will, it will look impossible to address the issue properly. It is the lack of the will to address the issues that brought us to this stage. And the thing has now become an octopus in a way that even if they want to do so it, it will be very difficult to sort things out within a short period.

School children are now endangered species in this country, especially in the North where bandits now attack and abduct innocent students, demanding huge ransoms.  What is the implication of this worrisome development on the future of the education sector in that region?

There is a saying by one philosopher that when you want to destroy a nation, you destroy the education system. This is exactly what is happening and will continue to happen. The root cause of the problem rests squarely on our leaders in this part of the country. Our local grassroots leadership deliberately chose to turn their back on the people, caring only for their pockets. Whatever they get is for themselves, their families, and their cronies. It is those who have been living in denial that are now taking up arms not only against the affluents, but also the larger society as a whole. I can’t see why anybody with his right senses will go and attack a whole village that has not benefitted from any social amenities from the government, destroy that community, take away their means of livelihood and then kill the innocent people. Yet, nothing is done. Now, you may be resting in your house, some bandits can decide to invade your home and carry you away even in Abuja. Recently, I lost my nephew, my junior brother’s first son, at Gashua. Weeks after, I am still figuring out the sad scenario. So, I am at a receiving end for no fault of mine. When your neighbour doesn’t sleep, you cannot also sleep with the two eyes closed.  This is what is happening to everybody. Prior to the elections of 2015, the APC told Nigerians that they had the magic wand, the capacity, and the experience to sort out certain societal ills only for them to turn around to do worse things than those they wanted out of power. That is what we are facing today.

How then do you feel seeing the Peoples Democratic Party (PDP) as an alternative platform losing many of its key elements to the ruling APC?

Ordinarily, I wouldn’t have wanted to say a word about the PDP or APC as political parties. Some of us broke away from APC with high enthusiasm to join hands with people of like minds to make a good opposition and take over the reign of power from the APC. We fought like a wounded lion in the 2019 general elections to assume the mantle of leadership. Still, it is my belief that we won the election, but we were denied the victory of the election. Elections now having been over, some of us thought that the PDP would have learned its lessons from the past and sit down to put its house together. But regrettably, they are still embroiled in crisis and, therefore, unable to act as an opposition party. Even when they had the opportunity to do congresses across the country, they failed to realise that impunity and lack of justice were the main reasons they lost out in the 2015 general elections. Now, they are doing exactly what the APC is doing because they are one and the same party. For me, personally, I don’t believe that both the APC and the PDP are in a position to sort out the ills of our country namely disunity, insecurity, lack of opportunities, and economic development. Instead, I am looking at the possibility of good Nigerians coming together to identify the problems of the country with a view to proffering solutions to them. Anyone who wants to join this platform should be a person who subscribes to the unity of the country. We want to recruit more Nigerians to start looking at that because the PDP and APC are no-go areas because they have no desire to sort out Nigeria’s problems to create a country of our dream.

For the sake of clarity, are you advocating the formation of a Third Force as an alternative to the two parties?

Why not, if it becomes necessary? Do you think the APC and the PDP can take us to the Eldorado with the way they behave with arrogance? They feel they are above the law. In fact, the major problem of this country lies with the governors. They’ve become warlords, personalizing political parties and running them like fiefdoms. Money is concentrated in the pockets of a few individuals which is why we have this security challenge.

Don’t you think that the so-called Third Force may still be an assemblage of the old recycled politicians who brought the country to where it is today?

I want to tell you that people can repent if they have the will. I know of people who stole from the public purse, but at a certain point, they began to ask questions about the use of the money and then returned the money to the people. There was a head of state in Nigeria who forfeited his assets to the nation. So, it is not impossible for a bad man to repent if he has the will and God can accept such repentance. If you want to repent, I will get you to swear by the Holy Quran before you join me. I don’t want to let my arsenal out! I don’t have to display my weapons in the eyes of the enemies or opponents.

Earlier, you spoke about disunity. Now, more than ever before, there are rising waves of separatist agitations across the country.

(Cuts in) Yes, because people felt excluded. If people believe you are trustworthy and you can live by your words, it doesn’t matter what you do, they will support you. But when they see physically that those who are benefitting are people from a small clique, then they agitate. It is part of democracy to agitate, but not violently.

But the government is approaching it in a violent way? Isn’t it?

I don’t want you to say that. Look at both sides. What I dislike in this government is the lack of communication. They don’t know how to communicate. That is why even if they are doing what is right, the people cannot see it because they don’t explain their reasons. We have to have leaders with empathy, with foresight and vision that can carry the nation along in whatever they want to do. And it is very well possible to carry Nigerians along.

Is the option of dialogue not better than the use of force to quench agitations?

You are not getting me right. I said the government is not communicating. Dialogue is communication. Don’t you think so?

How then would you situate this concept of dialogue within the context of the government’s efforts to deal with banditry?

The whole issue boils down to carrot and stick. If you try to dialogue and the other side refuses, and you’ve got the capacity to deal with him, deal with him and nip it in the bud. Don’t allow it to grow into an octopus which I have spoken about. I have watched a social media where people living within the boundary of 30 kilometres away from Niger Republic are saying that if their village is attacked, they would rather invite the Nigeriens army to come and assist them than to call Nigerian troops because they have more confidence in the Nigerien military. In five minutes, Nigerien soldiers are there, but they would have to wait for 90 minutes for the Nigerian army to come, by which time the bandits would have killed and gone.

So, Nigeria has become vulnerable to the extent that external forces can now come in to rescue distressed Nigerians?

Were you not in Nigeria when the Chadian President in military uniform intervened to repel Boko Haram in the Northeast up to Mongunu?

Why has the government not sustained the collaboration to ensure stability in the region?

Your guess is as good as mine.

The unity of this country is still very much elusive. What is the way to achieving peace and stability of this nation in the face of the rising trend of agitations?

It is very difficult to solve, but not impossible. It takes two to tango. Whoever is agitating should agitate in the name of Nigeria and for Nigerians not for a section. Let us not sow the seed of hatred where our children and grandchildren will not be able to sit at the same dining table to eat together. If we are talking on the premise of fairness and justice, it should be for all not for a section, religion, or a tribe. We should be our brothers’ keeper.