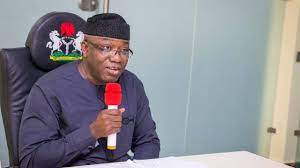 The Governor of Ekiti State and the chairman of Nigeria Governor Forum, Kayode Fayemi, said those behind the insurgency in the northeast region of Nigeria have been identified as the same sponsors of the escalating banditry in the Northwest and serial kidnappings in the Southwest regions of the country.

He, however, observed that winning the war against insecurity would require more than just military operations, noting that besides making sincere effort to reach the roots of the various forms of security crises facing the nation, leaders need to show political will and take political action to address the issues that had created the room for insecurity.

According to him, some of the issues that gave vent to the current situation, which need political will to address include poverty, inequality, social disconnection between leadership and the youth, which had rendered the youth available to derailing tendencies.

On the threat to the nation’s food security programme by the security situation, Fayemi said much is being done to address most of the fear being harboured by farmers as a result of farmers /herders crisis.

“We’re very concerned about that and that’s one of the issues that came up in my conversation with Mr. President this afternoon. For us, it’s no use giving just verbal assurances, farmers need to see concrete action on the ground, dedicated to protecting them in doing their business”.

“That’s why the majority of our states are very focused on the National Livestock Transformation Plan, NLTP, that would at least confine those who want to graze their cattle to a dedicated space rather than roaming around and destroying crops, which leads to conflicts that we’ve had between farmers and herders,” Fayemi said.

“We intend to reassure farmers, but pending the time that comes to fruition, on a state by state basis, we are all working hard by, in Ekiti for example, we have a regular meeting between farmers and herders in the state, to promote harmony between both sides, the representatives of the farmers, the ALFAN and the representatives of Miyetti Allah Cattle Breeders Association, and that has been going reasonably well”.

On the ongoing discussions on the legislative/judicial autonomy, he said the governors have no case against the principle but are particularly concerned about getting the framework for the process right.

One thought on “Sponsors of insurgency in Northeast, behind banditry in Northwest and kidnappings in Southwest – Governor Fayemi”