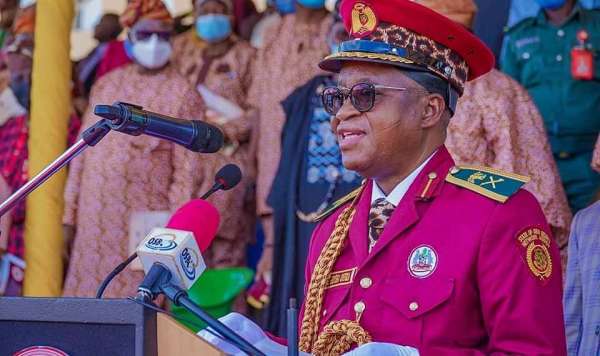 The News Agency of Nigeria (NAN) reports that the inauguration followed the completion of a 23-day intensive training by the personnel for professional savvy and the task ahead.

Speaking at the ceremony in Ejigbo, Ejigbo Local Government Area of the state, Mr Oyetola said his administration’s commitment to security, safety and welfare of the people remained irrevocable.

The governor added that his adminstration had given security the prime position as it was critical to its developmental agenda and a strategy to revolutionise the state’s economy.

He charged them to display the highest level of professionalism, discipline, competence, integrity and ‘Omoluabi’ ethos in the discharge of their duty.

Mr Oyetola also implored residents of the state to cooperate with the corps to make security management easy and peaceful.

“All Osun citizens must own the corps and provide them with information that will help them to effectively protect us.

“Amotekun is created to collaborate with the security agencies, the vigilante group as well as hunters across the state in order to ensure security of lives and property.

“Let me also remind you all that by the nature of Amotekun operations and network, yours is a complementary and collaborative security outfit.

“I, therefore, urge you to collaborate with your colleagues in neighbouring South-West states to keep our region and our people safe.

“Security is critical to our developmental agenda and a strategy for revolutionising the economy of the state.

“Consequently, you have a crucial role to play in attaining this noble objective. You must, therefore, secure the state with integrity, civility and a high sense of responsibility.

“Our state is noted as a peaceful one, we all have a responsibility to sustain our ranking as the Most Peaceful State in the nation.

“It is on this note that I implore all the citizens of the state to cooperate with the Amotekun Corps operatives to make security management easy and peaceful so that we can deliver a strong and prosperous Osun,” he said.

The governor who commended security agencies in the state for their services, assured that the government would continue to support them.

He disclosed that the state government had bought 20 security vehicles with communication gadgets to support security operatives in the discharge of their responsibilities.

“We have recruited 750 vigilantes across all local governments in the state to provide intelligence on the activities and suspicious movements of criminals to the officials of Amotekun.

“We shall continue to provide all the equipment necessary for the successful prosecution of security and execution of the Amotekun Project.

“We shall continue to strategise to deliver security to the state,” Mr Oyetola said.

In his address, the Chairman of the State Security Network Agency, Ademola Aderibigbe, a retired brigadier-general, applauded the creation of the outfit.

He described the Amotekun Corps as a child of necessity to stem the tide of insecurity in the state in particular and the South-West region in general.

Seye Oyeleye, Director-General, Development Agenda for Western Nigeria( DAWN) Commission, commended the governor for keying into the sustainable policies and programmes of the commission, which he said was aimed at moving the South-west and Nigeria forward.