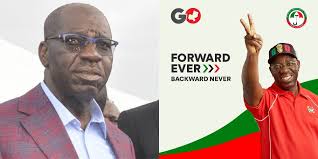 Governor Godwin Obaseki of Edo State has commended the judiciary for uphold the virtue of ensuing that democracy is well rooted in our country, he said this on Sunday in the state capital after the charges  brought against him by the all progressive congress was dismissed.

The federal high court setting in Abuja dismissed the certificate forgery suit instituted brought against him by the All Progressives Congress (APC). The governor hailed the judiciary, he said the victory in the federal high court, is a victory for the good people of Nigeria and edo state in particular.

“It was a most needless attempt by desperate individuals trying to undo the will of the people through the backdoor but we are happy today that justice and truth have prevailed,” he said.

“My profound gratitude goes to the judiciary who have stood indefatigably for truth and justice; the President of the Federal Republic of Nigeria, President Muhammadu Buhari (GCFR); my party, the Peoples Democratic Party (PDP); our party leaders and members; my teeming supporters; the good people of Edo State and all Nigerians.”

The governor said the verdict has confirmed once again that Edo people were well-guided in trusting him to lead them in the September 19th governorship election.

He pledged his administration’s commitment to prioritising the “development of the statenot minding the darts thrown by those who are embittered by their loss and continue their attempt to put spanner in the works even when they have been roundly beaten on all fronts.”

“The verdict of the Federal High Court, delivered by Honourable Justice Ahmed Mohammed is well-received and a victory for the rule of law