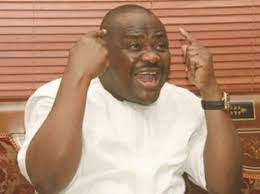 The Rivers State Governor Nyesom Wike has imposed a curfew in all the 23 local government areas of the state.

Governor Wike made the announcement in a statewide broadcast on Thursday.

The announcement is coming two days after the Governor imposed a night curfew at all land borders in the state.

The Governor said a review of the security situation since the last curfew was imposed shows that security threats still exist.

According to him, “It has become imperative for the state government to take further necessary measures to secure our state and safeguard lives and property”

“Accordingly, the state security council has today, after exhaustive deliberations decided and advised that a statewide curfew on human and vehicular movements be imposed as part of additional measures to prevent the faceless criminals from unleashing their deadly actions”.

“Consequently, a night curfew is hereby imposed on the entire twenty-three local government areas of the state, prohibiting any human and or vehicular movement within or any part of the state from 10pm to 6am from today 29th April 2021, until further notice”.

The governor explained that the intention behind the curfew is to secure the state and guarantee the protection of lives and property.

He also appealed for the understanding of residents of the state while charging them to report any suspicious movement to security agencies.