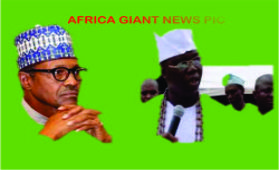 The lingering crises between the headers and the government of Ondo State, has generated a lot of controversies, leading his voice to the call, is the Aare Ona Kakanfo of Yorubaland, Iba Gani Adams, on Wednesday,

He said the president has failed to protect lives and properties of the people he vowed to protect, as such, he should allow the governors to take charge in their various states of the federation

This advice is coming in the wake of vacation order the governor of Ondo State Akeredolu (SAN) gave to herdsmen occupying Ondo forests to vacate.

In a statement on Wednesday, Adams said as the chief security officer of the state, the governor had the duty to protect the lives and property.

The Yoruba leader called Garba Shehu’s reaction, a threat to the sanctity of Ondo and a deliberate attempt to work against the state.

He Gani Adams maintained that the reserved forest was under the jurisdiction of the state government, not the president.

“Garba Shehu/Presidency apparently doesn’t know the meaning of a reserved forest. It’s not accessible except to authorized personnel/loggers. Apart from the place being a place for valued cash trees, it’s also meant as a haven of safety for protected animals against poachers.”

“A reserved forest is not a place of residence for anyone, not even Ondo indigenes or farmers. It is most unfortunate that such a statement is coming directly from the presidency, which according to the constitution, has the prerogative to protect the people.”

He further ask the Buhari lead administration to seat tight and work out a modality on how his government can get to work and save guard the territorial integrity of the nation. He cited the security instances or killing, kidnapping and robberies that traverse the land..

“The governor’s convoy was attacked on two occasions. Two prominent Obas have been kidnapped. A first class monarch was killed by bandits masquerading as Fulani herdsmen. A university lecturer was abducted. The daughter of Afenifere leader, Pa Reuben Fasoranti was murdered. Chief Olu Falae’s farm was invaded on four occasions, leading to the death of one of our members, a security man.”

The high chief insisted that the governor’s decision is in the right direction and in the interest of the state.

Gani Adams admonished the Yoruba’s to support the quest of the Governor of South west in founding a lasting solution to the invasion of these criminally minded elements, in the region.