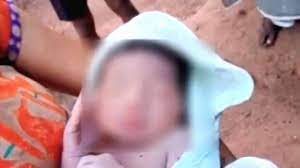 A new born baby abandoned in the bush and rescued by a Good Samaritan at Moferere in Ado Ekiti, the Ekiti State capital, has survived in hospital.

The baby girl who still had the placenta attached to her umbilical cord and blood all over her body was wrapped in a polythene bag.

The management of the hospital was said to have contacted the police and the state’s Ministry of Women Affairs on the matter.

A staff of the hospital who craved for anonymity said the baby was in good condition, adding that residents of the area had been donating clothes to her.

An official of the women affairs ministry and a policewoman later took the baby away from the hospital.

Confirming the incident, the police spokesman in the state, Sunday Abutu, said effort was on to identify the mother.