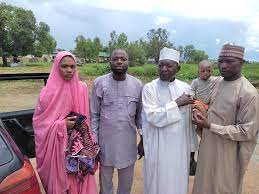 Wife of the former councilor of Tundunwada ward of Gusau local government of Zamfara State, Babangida Damba and her eight month old baby have regained their freedom.

The duo were abducted by unknown gunmen on Wednesday at their residence in Damba Area of Gusau.

According to sources close to the family, the kidnapped victims were released on Friday evening after spending more than 48 hours in captivity.

During the invasion of the residence, the heavily armed men shot multiple bullets at the door to gain access into the house, before whisking away the nursing mother and baby.

The assault left the husband with a gunshot wound on his left arm.

“Alhamdulillah, Glory be to Allah, my wife and my baby regained freedom,” the former councilor, Babangida Haruna, posted on his Facebook page.

It is not clear whether a ransom was paid before the duo were released.