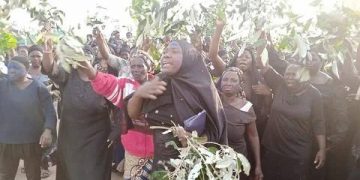 Protests on Sunday rocked Kastina State over the abduction of many schoolboys from the Government Science Secondary School, Kankara in the Kankara Local Government Area of the state

The protesters, mostly women, demanded the prompt rescue of students abducted by bandits on Friday night.

Carrying placards, the protesters went around the school’s premises and some parts of the town conveying various messages.

Some of the inscriptions on the placards include: ‘Government must speak out’, ‘We want our children back’ and ‘We want security in Kankara’.

The governor gave the figure when he received a Federal Government delegation led by the National Security Adviser, Babagana Monguno on Sunday.

Masari who explained that the school has a population of 839 students said so far, those kidnapped cut across the state with the boarding school housing all children from all parts of the state and outside the state.

“Based on the available record we have, we are still searching for 333 students through either the forest or their parents to ascertain the actual number that has been kidnapped,” Governor Masari said.

“We as a government we are yet to be contacted by any group or person responsible for the kidnap of the students.”