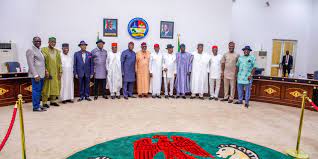 The pan-Yoruba sociopolitical organisation, Afenifere; the Yoruba Ronu Leadership Forum; the apex Igbo socio-cultural group, Ohanaeze Ndigbo; and the Pan Niger Delta Forum (PANDEF) have thrown their weight behind the demand by the southern governors for the next president of Nigeria to come from the South.

Rising from its second meeting held yesterday at the Lagos State Government House in Ikeja, the southern governors resolved that the next President of Nigeria should come from the southern region.

In a six-point communiqué issued at the end of the meeting, which was signed by the Chairman of the Southern Governors’ Forum and Governor of Ondo State, Mr. Rotimi Akeredolu (SAN), the governors also gave their members a timeline of Wednesday, September 1, 2021, to promulgate the anti-open grazing law in all the southern states.

They also rejected the three per cent host community fund in the Petroleum Industry Bill (PIB) and recommended that the fund should be increased to five per cent.

The governors also rejected the removal of the electronic transmission of election results from the Electoral Act Amendment Bill 2021, and the confirmation of exclusive jurisdiction in pre-election matters on the Federal High Court.

The forum also unanimously chose Lagos State as its permanent secretariat and appreciated the Governor of the state, Mr. Babajide Sanwo-Olu, for the wonderful hosting of the meeting and his good work in the state.

The governors re-affirmed their commitment to the unity of Nigeria on the pillars of equity, fairness, justice, progress and peaceful co-existence between and amongst its people.

“The forum reiterates its commitment to the politics of equity, fairness and unanimously agrees that the presidency of Nigeria be rotated between Southern and Northern Nigeria and resolved that the next president of Nigeria should emerge from the Southern Region,” said the communiqué.

The governors reviewed the security situation in the country and commended the security operatives for their relentless efforts in restoring security and safety.

They commiserated with families and loved ones of those who have fallen in the line of duty, and e-emphasised the need for state police.

The southern governors also “resolved that if for any reason, security institutions need to undertake an operation in any state, the Chief Security Officer of the state must be duly informed.”

“The forum frowns at selective criminal administration of justice and resolved that arrests should be made within the ambit of the law and fundamental human rights,” and “set a timeline of Wednesday, September 1, 2021, for the promulgation of the anti-open grazing law in all member states” and “resolved that funds deducted from the Federation Account for the Nigeria Police Security Trust Fund should be distributed among the states and federal government to combat security challenges.”
The governors commended the National Assembly for the progress made in the passage of the PIB.

They, however, rejected the proposed three per cent and supported the five per cent share of the oil revenue to the host community as recommended by the House of Representatives.

The southern governors also kicked against the proposed 30 per cent share of profit for the exploration of oil and gas in the basins.

According to them, “The forum rejects the ownership structure of the proposed Nigeria National Petroleum Company Limited (NNPC). The forum disagrees that the company be vested in the Federal Ministry of Finance but should be held in trust by Nigeria Sovereign Investment Authority (NSIA) since all tiers of government have stakes in that vehicle.

“In order to consolidate our democracy and strengthen the Electoral process, the Southern Governors’ Forum rejects the removal of the electronic transmission of the election result from the electoral act; and also rejects the confirmation of exclusive jurisdiction in pre-election matters on the Federal High Court.

They unanimously chose Lagos State as the forum’s permanent secretariat.

The governors of Anambra and Cross River States were not represented at the meeting.

Meanwhile, the Yoruba Ronu Leadership Forum has thrown its weight behind yesterday’s resolutions of the southern governors.

President of the forum, Mr. Akin Malaolu said in a statement yesterday that the southern “governors took landmark decisions that may put the nation on a good road to the recovery of her beauty in African’s eyes and the world.”

He said the governors’ objections on what host and producing communities will take for government mining of oil on their indigenous lands and as stated in the petroleum industry bill, including the reconfiguration of the NNPC deserves scrutiny once again by the two chambers of the National Assembly.

He called on the Senate and House of Representatives to revisit their versions of the bills to address some disagreement, especially in the area of the percentage that should be allocated to host communities.

“We support the governors for recognizing the need for respect and regard for their positions as the chief security officers of their individual state. Their approval to enact anti-open grazing laws as legal teeth to reduce famine in the land and curb incessant conflicts deserve praises,” the forum said.

The forum condemned what it described as the Gestapo-style known to belong to Hitler’s era perpetrated against Chief Sunday Igboho, saying it was an incident that the Governor of Oyo State, Mr. Seyi Makinde, should take up officially and persuade the federal government to apologise for their criminal actions.

Reacting to the governors’ demands, Afenifere, yesterday said since the North would have ruled consecutively for eight years by 2023, the next president would come from the South.

The National Publicity Secretary, Mr. Jare Ajayi, while speaking with THISDAY, said it was imperative that the next president must come from the South if only for the sake of equity, fairness and justice.

“So, to us in Afenifere, political parties should ensure that their presidential candidates are picked from the South. But beyond the issue of where the next president comes from, it must be a condition that restructuring takes place before the next elections in Nigeria! Restructuring that encapsulates true federalism and confers the leverage for self-determination on the constituent components of Nigeria.”

Also reacting to the communiqué, the Ohanaeze Ndigbo’s National Publicity Secretary, Chief Alex Ogbonia, who spoke to THISDAY, appealed to the governors to move a step further by conceding the presidency to the South-east in the spirit of justice, equity and fairness.

He said: “The outcome of their meeting in Lagos is a welcome development because the issue of the presidency moving to the South-east should be non-negotiable.

“This was part of the gentleman agreement reached between Northern and Southern leaders in 1998 to the effect that the Presidency should alternate between the North and the South.

“The governors should therefore be magnanimous enough to reciprocate the kindness of the people of the South-east by boldly declaring that 2023 is for the South-east.”

PANDEF has also hailed the unanimous resolution on the Southern presidency.

The group’s spokesman, Hon. Ken Robinson, in a reaction, expressed happiness that the Southern governors met again, less than two months, after their historic Asaba meeting, to further accentuate the wishes and aspirations of the people of Southern Nigeria.

PANDEF, he said, is happy that the Southern governors have now added their voice to the critical matter, given the irrational proposals by some mischievous persons that the presidency should be open to all zones of the country in 2023
The group congratulated the Southern Governors and commended them for the demonstration of solidarity, and the commitment to consolidate the Unity of Southern Nigeria adding that “we hope that they would sustain this spirit of understanding and congruence, in the best interest of our people and the country”.