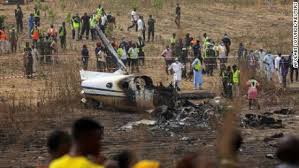 A military aircraft crashed a few meter of the runway at the international airport in Abuja the Nigeria capital on Sunday, the spokesman of the Nigeria Air Force Air Vice Marshal Ibikunle Daramola made this known to the public.

Seven persons has been reported killed. The spokesman said, first responders were already at the scene, he said that all seven on board died in the crash.

While urging the general public to remain calm and await the outcome of the investigation, the CAS, on behalf of all Nigerian Air Force personnel, commiserated with the families of the deceased.

In a similar vein, Hadi Sirika, the minister of aviation has confirmed the incident.

The minister who earlier on Sunday disclosed some details regarding the crash on Twitter did not however state how many persons were aboard the ill-fated flight.

Mr. Sirika also sued for peace, urging Nigerians to be calm while the nation prays for the souls of the departed.