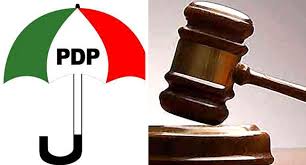 Commendation is pouring in from all sphere, over the judgment that sent the university don to three years and six months in prison for election result manipulating in Akwa Ibom state.

The main opposition party in Nigeria the Peoples Democratic Party, PDP, has commended the judiciary for the bold steps they have taken to bring inn sanctity to the entire democratic journey in Nigeria.

The returning officer, who connived with the All Progressive Congress, APC, to rewrite election result during the 2019 general election, the judgment is a wakeup call to others that wish to walk that path, says the opposition party.

PDP said the “three years jailed term handed to Prof. Peter Ogban, a professor of University of Calabar, for manipulating the result of Akwa-Ibom Northwest senatorial election in favour of Gods will Akpabio was a huge lesson for compromised individuals working to subvert the will of the people.’

The former ruling party stated this in a series of tweets via its official Twitter handle.

According to PDP: “The @OfficialPDPNig asserts that the long arm of the law will soon catch up with other corrupt returning officers, including some shameless professors who were heavily bribed and compromised by the
@OfficialAPCNg to alter results and rig it into power at various levels in the 2019 general elections.

“It is shameful that individuals who had attained the peak of enviable career in the academia could submit themselves as willing tools in the hands of a fraudulent, debased and manipulative political party, like the @OfficialAPCN, to alter election results and subvert the collective will of the people in the 2019 elections.”