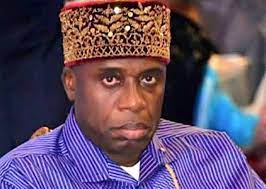 Nigeria can best attained her potentials if the country stays and remain together in unity, says Chibuke Amaechi Nigeria minister of Transportation. The minister spoke on Friday at the 34th Convocation Lecture of the University of Calabar.

The Minister’s speech, entitled ‘The National Question and the Challenges of Nationhood in Nigeria. He used the opportunity to preach equal opportunities regardless of ethnicity or class

He acknowledged the insecurity and criminality, which he said most be tacked, he also used the opportunity to warn the political elite on their actions and comments.

“I agree with those patriotic voices who have cautioned that we need to do everything to arrest the general drift towards un-governability and state failure.

“Nigeria should not queue up behind nations that have allowed these nascent forces to threaten their very existence or overwhelm them. We should instead face up to the challenges with maximum will.”

On the calls for restructuring and regional government, Amaechi said all arguments can be resolved through engagement of all stakeholders.

“We have begun to hear loud voices of disunity from various sections of the country.”

The minister said the calls were in response to current economic difficulties and the problem of insecurity.

“Some have insisted on restructuring the federation. Others have advocated increased regional autonomy. Some extremists are calling for secession of parts of the country from the federation.”

Amaechi said none of “these divisive options” would serve the urgent needs of Nigeria or the long term aspiration of the people.

“The concerns being raised by Nigerians about the future of our country are legitimate. They are indications of great patriotism and love,” he added.