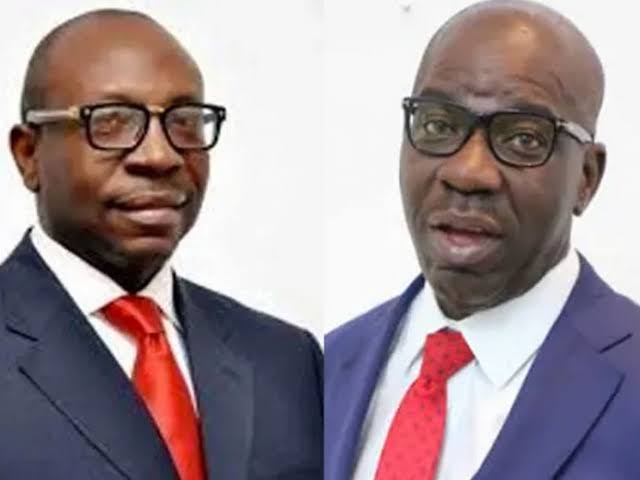 The Amagba Community of Oredo Local Government Area of Edo State has expressed gratitude to Governor Godwin Obaseki for taking the courage to revoke the Certificate of Occupancy (CofO) of the 18 hectares of farm land held in the community by Pastor Oasgie Ize-Iyamu, the All Progressives Congress (APC) guber candidate in the 2020 Edo governorship election.

Elder Victor Algbe; Elder O. Igbinidu; Monday Iduorlyekemwen and Elder John Aware, thanked Governor Obaseki for accessing to the cry for justice over the expanse of land, which they claimed was acquired by Ize-Iyamu through acts tantamount to “injustice and oppression.”

The community noted that the entire land did not belong to Ize-Iyamu, “because portions of it were allocated to other individuals, adding that the land, hitherto awarded to him by the community, had since been revoked ‘by the people and leaders of Amagba, after several letters by the people and a final letter written to him by the legal representative of the Amagba Community.”

Governor Obaseki, it would be recalled, had penultimate month announced the revocation of the C-of-O of the 18-hectare farm land and went ahead, last week, to official gazette the revocation order, thus making it official.

Ize-Iyamu, had prior to the revocation, been using the expanse of land for farming and training of prospective farmers, with Governor Obaseki, during his first term, between 2016 and 2020, sending trainees to the facility.

Elder 0. Igbinidu wrote in the statement by the community, titled: “Revocation of Ize-lyamu’s 18 Hectares Land: Official Statement of Amagba Community read in parts: “We, the indigenes of Amagba Community in Oredo Local Government Area (LGA) of Edo State, wish to express our appreciation to Governor Godwin Obasekl for listening and hearkening to our pleas expressed in the various protest letters written to him on the Injustice and oppression meted on us by Osagie izelyamu.

“We are indeed grateful for the Governor‘s intervention and move to revoke the Certificate of Occupancy (C-of-O) on a land measuring over 18 hectares, which was dublously taken from us some time ago by the said individual.

We hereby state, without equivocation that the said expanse of land, amounting to over 18 hectares did not wholly belong to ize-iyamu because portions of it were allocated to other individuals.

httpsThe community added that it decided to withdraw the large expanse of land because the allottee deviated from the purpose for which the land was allocated, “Agricultural institution to create jobs as well as open up the area for increased economic activities.”

It turned out that lze-Iyamu only used the proposed agricultural institution to deceitfully acquire the land from the community, because in fact, there has never been any activity on the said parcel for these many years: Rather, the place, having been left unused, has become a den of criminals, posing severe security and safety threat to women, children and the entire people of Amagba Community,”the statement added.

Amagba Community pointed out that “even before the community began to solicit the intervention of the governor, several engagements have been ongoing to draw lze-Iyamu’s attention to the need to vacate the said property, having failed to put it to use for the purpose for which it was allocated.”

“We have, over the years, endured the pain and agony of the domination of Mr. lze-iyamu, who has depended on his political clout and connection with successive governments, to deprive us of the purposeful use of our land and also put our lives in danger, having Ieft such a vast land unused in the midst of a thriving community, thereby making the land a cover for armed robbers, rapists, hoodlums, among others.

“We are therefore immensely grateful to his Excellency, Mr. Godwin Nogheghase Obaseki, for his intervention in revoking the land title and opening up opportunities for the land to be used by government to advance the development of Amagba community and its environs.

“The people of Amagba also acknowledge the numerous developmental projects embarked upon by the Governor in our community, including the over 15km Ugbor-Amagba Road, which has since been completed, as well as several other adjoining roads that have been constructed. We, once more. reaffirm our unfiinching support for the Governor for his interest in the development of Amagba Community and appeal that these efforts be sustained,” the statement concluded.

In spite of the huge investment in the water sector by the government and international organisations, water scarcity has grown to become a perennial nightmare for residents of Abeokuta, the Ogun State capital. This report x-rays the lives and experiences of residents in getting clean, potable and affordable water amidst the surge of COVID-19 cases in the state…

The Lagos-Ibadan railway was inaugurated recently for a full paid operation by the Nigerian Railway Corporation after about a year of free test-run. Our reporter joined the train to and fro Lagos from Ibadan and tells his experience in this report…

The Lagos State Judicial Panel of Inquiry probing the killings at Lekki Toll Gate, on Saturday resumed viewing of the 24hrs footage of the October 20, 2020 shooting of #EndSARS protesters by personnel of the Nigerian Army…

On Monday, October 25, 1993, in the heat of June 12 annulment agitations, four Nigerian youngsters, Richard Ajibola Ogunderu, Kabir Adenuga, Benneth Oluwadaisi and Kenny Razak-Lawal, did the unthinkable! They hijacked an Abuja-bound aircraft, the Nigerian Airways airbus A310, and diverted it to Niger Republic. How did they so it? Excerpts…

Sahabi Danladi Mahuta, a community mobiliser and APC chieftain. Mahuta spoke to select journalists at the sidelines of an Islamic conference in Abuja recently. Excerpts…