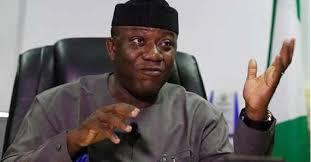 Among men they are men, men that stand in the face of courage to speak the truth and defend it, but, it remain to been seen if what he said is the real reflection of his new direction.

Governor Kayode, of Ekiti state, has scored his party the ruling All Progressive and president Muhammadu Buhari far below expectations, he said the APC has failed to deliver on the promises made to Nigeria before being elected. Mr Fayemi said though some of the issues in the country predated the government of Mr Buhari, elected officials should take responsibility for not delivering on campaign promises to Nigerians.

“I’m not going to shy way from the expectations people had before we came to office. I was a leading player in the campaign that brought my principal (Mr Buhari) to power, Mr Fayemi told Channels TV. “We promised Nigerians quite a number of things, particularly centering on security, anti-corruption, and on economic growth. Have we been able to attain all of what we promised? Obviously not.”

Mr Buhari’s promised to tackle insecurity, fight corruption and pursue economic development. However, Nigerian economy has slipped into recession twice on the watch of Mr Buhari in the last six years, while banditry and school kidnapping have become commonplace.

In the last four months, bandits have broken into schools kidnapping no fewer than 800 students across Zamfara, Katsina, Niger and Kaduna State.

Bloomberg ranked Nigeria as second highest on the global list of the unemployment rate. Figures tracked by Bloomberg showed that with the 33.3 percent unemployment rate, Nigeria surpasses South Africa on a list of 82 countries, while Namibia leads with 33.4 percent.