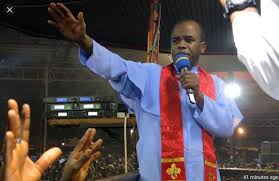 The Spiritual Director of Adoration Ministry, Enugu Nigeria (AMEN), Rev Father Ejike Mbaka says Garba Shehu, Senior Special Assistant on Media and Publicity to President Muhammadu Buhari is not safe in Aso Rock with the level of insecurity in the country.

In a video seen by SaharaReporters, the cleric warned Shehu to tread with caution, adding that he can also be killed by rampaging bandits.

He was reacting to a statement by presidential spokesperson that his recent attack against the Nigerian government is because Buhari denied him the contract he lobbied for.

The presidency accused Mbaka of currying the President’s favour by bringing three contractors during his (Mbaka’s) visit to Aso Rock.

But Mbaka described the accusation against him as laughable and childish as the three men he took to the presidency were men with facilities to fight insecurity.

“Somebody talking about Fr. Mbaka and contract: God used the man to tell the world that Buhari’s government is not giving me money; that is how God works. Shehu, God bless you for telling everyone that you are not giving me a contract.

“The three men I brought were the men that would have handled insecurity in this country because they have the gadgets and facilities, and they came during Buhari first tenure and promised to help Nigeria conquer insecurity.

“The insecurity I’m talking about can affect them, even the Shehu who is talking, the Bandits can come and kill him. There is no level of blocking federal house and securing Aso Rock that can secure the country if they don’t take care of the youths.”