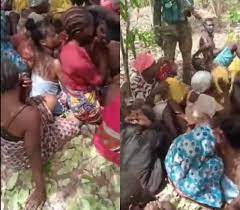 Bandits yesterday threatened to kill the remaining 29 abducted students of the Federal College of Forestry Mechanisation, Afaka, Kaduna, still in their custody, following the refusal of the Kaduna State Government to meet their demand of N300 million ransom.

Of the 39 abducted from the school on March 11, 10 were freed early this month following what sources said was payment of ransom by some parents.
The Kaduna State Government insists that it would not negotiate with the bandits, while the parents are begging Governor Nasir El-rufai to negotiate with the outlaws.

At a press conference in Kaduna yesterday, the spokesman of the parents, Friday Sanni confirmed receiving threats via telephone from the bandits to kill the remaining 29 abductees who have now spent 37 days in the dungeon of the criminals.

“We are calling on Nigerians, non-governmental organisations, charity organisations and donors to come to our aid in donating to rescue our children. We don’t know what is happening to them.

“The bandits have threatened to kill our children if we play with them. The other time, they said they will marry the female and kill the men and that a time will come when even if we bring the money, the money will not be useful.”

He said since government claimed security agents rescued the two batches of 10 students earlier released, they should do something about the remaining students.

Sanni added: “The government has said any parent who negotiates with the bandits will be prosecuted but most of the parents are already arrested emotionally, our children today are faced with AK 47 guns on them. The faith of our children is what we don’t know; they have spent 36 days without clothing, food, clean drinking water or bathing.”

He said the parents would continue to find a way of reaching out to the bandits.
Sanni said: “We will continue to protest, no matter the number of security forces. The highest is death and we are ready to sacrifice that for our children who have promising futures.”

Sources among the parents said the bandits were earlier given N17 million for the release of all the 39 students following negotiations, “but after they collected the money, they changed their mind, saying it was too small and decided to release only 10 of the students.”

The source said negotiations with the bandits by parents were still going on.
In a statement after the briefing by the parents, the Kaduna State Commissioner for Internal Security and Home Affairs, Samuel Aruwan, said government would not succumb to “emotional blackmail” regarding the fate of the abducted students.

“The Governor will continue to work hard until banditry is contained, without succumbing to emotional blackmail and gradual politicisation of the unfortunate situation,” Aruwan said.
The Commissioner denied reports that Governor El-Rufai threatened to prosecute parents of the abductees for negotiating with the bandits.

The governor had vowed that he would not negotiate nor pay ransom to bandits and that anyone that negotiates with bandits on behalf of the state government would be arrested and prosecuted.

Aruwan clarified, saying: “Contrary to the mischief in some sections of the media, the bond between the Governor of Kaduna State, Malam Nasir El-Rufai and the parents of the abducted students of Federal College of Forestry Mechanisation, and other citizens in captivity, is deep empathy amidst spirited efforts to secure them.

“The governor will continue to work hard until banditry is contained. Some section of the media has been reporting purported threat by the governor to prosecute parents of the abducted students, which is simply false and deeply mischievous.

“The government statement in question was a warning to “impostors who have been presenting themselves as government-appointed emissaries to negotiate with bandits across the state and has nothing to do with the parents or relatives of the abducted students or any other person in captivity.”

He said the state government would not join issues with the parents “whose pain is understandable, and with whom we share the common goal of the return of all the abducted students.”