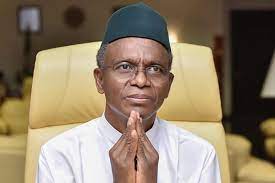 Governor Nasir El-Rufai of Kaduna State, has asked the Federal Government to declare bandits threatening the peace of the Northwestern region as “terrorists”.

El-Rufai made this call after receiving the third quarter security report from the Commissioner of Internal Security and Home Affairs, Mr. Samuel Aruwan, at the Sir Kashim Ibrahim House, Kaduna on Wednesday.

According to the governor, declaring the bandits as terrorists will enable the Nigerian security forces to utterly decimate the gunmen without fear of being sanctioned by the international community.

“We in the Kaduna State government had always urged for the declaration of bandits as insurgents and terrorists. We have written letters to the federal government since 2017 asking for this declaration because it is this declaration that will allow the Nigerian military to attack and kill these bandits without any major consequences in the international law.

“So, we support the resolution by the National Assembly and we are going to follow up with a letter of support for the federal government to declare these bandits and insurgents as terrorists, so that, there will be fair game for our military,” the governor declared.

He also noted that the recruitment of 1,000 youths each across the 774 local government areas of the country would deal a deadly blow to bandits and other criminal elements in the land.

Earlier, a report presented by the Kaduna State Commissioner for Internal Security and Home affairs, Samuel Aruwan, had revealed that at least 888 people were killed in violent attacks by bandits in various parts of Kaduna State in the last nine months.

While most of the killings were attributed to kidnappings and the activities of bandits, the commissioner however, stated that some deaths within the period under review were due to communal clashes, violent attacks and reprisals that cut across all ethnic and religious groups in the state.

In his reaction, Governor El-Rufai who sympathized with the victims of the attacks, ordered for the immediate compensation of surviving victims and relatives of the deceased.

He pledged to continue his support for the security forces as they carry on their push to dislodge the criminals from their hideouts and rid the region of all marauders threatening the peace.