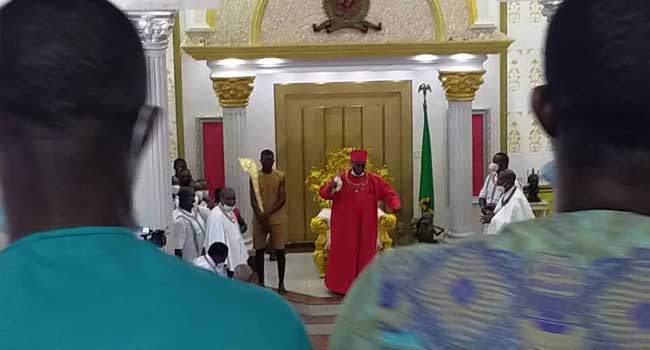 The Oba of Benin, His Royal Majesty Ewuare II, has said repatriated Benin Bronzes should be returned to the Benin Royal Museum to be cited within the precincts of his palace.

At a press briefing in his palace on Friday, the Oba called on the Federal Government to take custody of the artefacts when repatriated until the royal museum is ready.

The Oba’s intervention and comments follow the controversy over where the artefacts, looted by British soldiers during the invasion of the Benin Kingdom, ought to be kept when returned.

According to him, individuals or institutions dealing with the private company, Legacy Restoration Trust, regarding the return of the looted artefacts does so at their own risk and against the will of the Benin people.

He advised Governor Godwin Obaseki to review the use of a private company to pursue the return of the artefacts, adding that the items should be returned where they were taken from.

On May 18, Germany, through its Director-General of Culture and Communication, Dr Andreas Gorgen, said his country was on a restitution mission to Nigeria to return all artefacts taken from the Benin Empire.

The announcement had led to questions over where the stolen artefacts – bronze, wooden, brass, metal and ivory tusks; collectively known as the Benin bronzes – would be returned to.