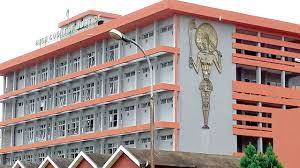 The Edo State High Court, Sitting in Benin City has ruled over the boundary dispute between Egbirhe and Okhuoromi Villages both in Oredo Local Government Area of Edo State in favour of Okhuoromi.

Delivering Judgement in Suit No. B/361/2019, the Chief Judge of Edo State, Hon. Justice Esther Edigin, dismissed the claim of Egbirhe in its entirety and upheld the earlier decision of the Benin Monarch, HRM. Oba Ewuare II, over the dispute.

Justice Edigin who described the claimants’ case as an attempt to put a woo across the eye of the court maintained that it was adduced during trial that the claimants willingly submitted to the Customary Arbitration of the Benin Monarch and did not appealed the Oba’s decision over the matter.

The Judge posited that there was nothing before the court that suggested the palace Chiefs sent by the Benin Monarch demarcated the boundary between the two Villages differently from the directive of the Oba, adding that it was adduced during trial that both parties went on a ‘Thank you visit’ to the palace after the monarch’s resolution.

“The Claimants failed to prove their case against the defendants and the case was an abuse of court process.

“The Claimants’ case is hereby dismissed in its entirety and I therefore upheld the earlier resolution of the Benin Monarch over the issue”, Justice Edigin averred.

Reacting to the Judgement, Counsel to the Defendants, P.E. Uwadiae esq. commended the Judge for the Judgement, adding that the court has further reaffirmed the position of the Oba over the dispute.

“We want to salute the courage of the court to have abide by the position of His Royal Majesty and its shows that we have respect for the institution of the Oba”, he said.

Counsel to the claimants’, Dr. M.O. Oseghae esq. said that his clients did not challenge the decision of the Oba but that the palace functionaries sent for the boundaries demarcation did something different from the monarch’s directive.