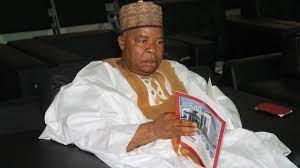 Sources said he may have died of COVID-19.

The late former deputy Senate President will be buried at 2pm today.

Mantu, who hailed from Gindiri, in Mangu Local Government Area of  Plateau State, was an influential political figure in Nigeria for several years. During the aborted third republic, he vied for the Chairmanship of the National Republican Congress, NRC, one of the two registered political parties.