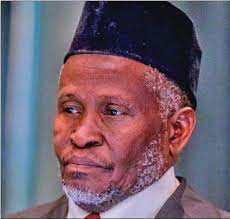 The Chief Justice of Nigeria Tanko Muhammed, has resigned, source told Africa giant news that he tendered his resignation on Sunday night.

The reason for his resignation according to him, is as a result of ill health, source close to him said he has been battling with health issues for some time now.

There is presently arrangement to swear in the next senior justice of the Supreme Court. The next according to ranking is justice Olukayode Ariwoola, he is set to be swear in, as the acting chief justice of Nigeria.

In some time now the resigned chief justice Tanko Muhammad has been seriously ill. However, a former announcement will be made shortly that will swear in Justice Olukayode Ariowoola in acting capacity.

Only last week, 14 justices of the Supreme Court had written him a letter to lament the decrepit state of affairs in the apex court.