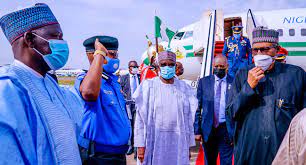 President Muhammadu Buhari has returned to Nigeria four days after he travelled to Paris, France.

He arrived in Abuja, the Federal Capital Territory (FCT) on Thursday evening and was received by his Chief of Staff, Professor Ibrahim Gambari, and other top government officials.

In France, President Buhari attended the African Finance Summit, which focused on reviewing the African economy following shocks from the COVID-19 pandemic.

The summit drew major stakeholders in the global financial institutions and some heads of government who collectively discussed external funding and debt treatment for Africa and private sector reforms.

While on the trip, President Buhari held a bilateral meeting with President Emmanuel Macron of France to discuss growing security threats in the Sahel and Lake Chad region.

At the meeting, both leaders committed to working together to fight insecurity bedevilling in the Lake Chad basin area and the entire stretch of the Sahel region.

President Macron pledged his steadfast support for Nigeria and its people amid the disturbing rate of security challenges in various parts of the country.

He gave the assurance that his government would give Nigeria all the needed support to combat the security threats hindering the economic growth of the nation, as well as promised to support the African country in confronting the challenges faced with COVID-19 vaccines.

President Buhari, on his part, highlighted the challenges facing Nigeria and its neighbours, as well as hinted at the steps he has taken to reignite response to the situation, which he said included the appointment of the new service chiefs.

According to him, Nigeria is willing to work with France and all international partners to reign in the security challenges in the country.

The President was accompanied on the trip by the Minister of Foreign Affairs, Geoffrey Onyeama; Minister of Finance, Budget and National Planning, Zainab Ahmed; Minister of Trade and Investment, Adeniyi Adebayo; and Minister of Health, Dr Osagie Ehanire.

Others were the National Security Adviser, Babagana Monguno, and the Director-General of the National Intelligence Agency (NIA), Ahmed Rufai.