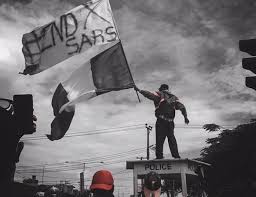 Despite threats from the Nigerian government to treat any fresh demonstration, particularly if it threatens to disrupt peace and security of any part of the country, as high treason aimed at unconstitutional regime change, several Nigerian youths have resumed what they termed a second wave of #EndSARS protest in Osogbo, the Osun state capital, demanding an end to all forms of police brutality.

The demonstrators, in their hundreds, were also demanding the release of all detained protesters and unfreezing of their accounts by the Central Bank of Nigeria (CBN).

They had converged at the Ogo-Oluwa area and marched to the Osun State House of Assembly where it’s believed they will demand an audience with the leadership of the Assembly.

Some of the protesters had various placards which read: “We are not fighting for any political party”, “#End Bad Judiciary in Nigeria”, “#End fake judicial panel of Inquiry in Osun”, “Unfreeze all the frozen account”, “We are Nigerian youths,” among others.

Africa giant News had earlier reported how security operatives including police, soldiers, and officers of the civil defence stormed the Lekki Toll Plaza in Lagos state to prevent a second wave of #EndSARS protests.

The federal government had recently said it will treat any fresh demonstration particularly if it threatens to disrupt peace and security of any part of the country, as high treason aimed at unconstitutional regime change.

On Monday, the Nigerian leader President Muhammadu Buhari warned that his administration will decisively deal with any act of hooliganism from Nigerians who hide behind the guise of peaceful protests.

In October, there were nationwide demonstrations against police brutality with several reports suggesting the army shot at protesters at the Lekki Toll Plaza, in Lagos state, an incident reports suggest claimed some lives. The army has vehemently denied shooting at protesters.

At Osogbo where the second wave of protests is currently holding, suspected hoodlums attacked the state Governor Gboyega Oyetola while he addressed protesters.

The judicial panels of inquiries in different states set up to investigate cases of police brutality are yet to conclude the probe.