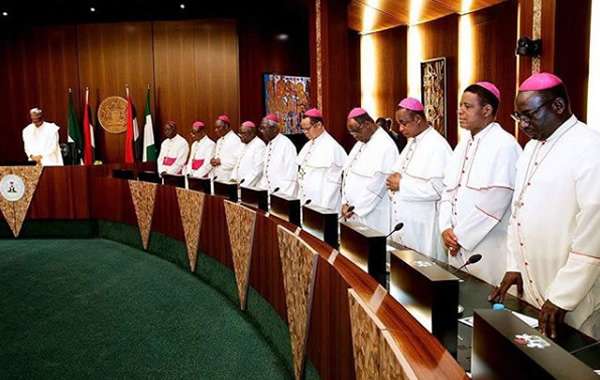 Say insecurity, dwindling economy, others are indices of a failed country

The Catholic Bishops of Ibadan Ecclesiastical Province has condemned the alleged selective administration of justice by the President Muhammadu Buhari-led federal government, saying this development has greatly affected the image of the nation in the global community.

The bishops from Ibadan Archdiocese, Ilorin, Ondo, Oyo, Ekiti, and Osogbo Dioceses in a communiqué released after their meeting at the Domus Pacis Pastoral Institute, Igoba, Akure, on Wednesday noted that the current waves of insecurity in the country is an indication that the government has failed to address the criminal elements wreaking havoc but dissipating on silencing lawful citizens.

The communiqué which was made available to newsmen in Ado-Ekiti, the state Ekiti state capital on Wednesday by the Catholic Bishop of Ekiti, Most Rev Felix Ajakaye was signed by the province chairman, Most Rev Gabriel Abegunrin, and the secretary, Most Rev Akin Oyejola.

The bishops lamented that the nation under the present administration of President Muhammadu Buhari has lost its soul and that the insecurity pervading the land, dwindling economy, and others are all indices of a failed country needing an urgent revival.

They berated the presidency for attacking the Catholic Bishop of Sokoto Diocese, Matthew Kukah for his revelations to the United States Congress on the state of things in the country, insisting that Kukah made patriotic and commendable points with verifiable data on the unlawful persecution of Nigerians.

The communiqué reads, ” Nigeria, our country, seems to have lost its very soul because it is no longer a healthy entity. The good health of any nation consists in its capacity to offer its citizens a territory where they can feel at home, feel secure and enjoy the basic necessities of life.

” This, unfortunately, is no longer the case in our dear country, Nigeria, where, armed conflicts, armed robbery, kidnapping for ransom, insurgency, banditry, and extrajudicial killing persist as the order of the day. When a nation loses its soul, its people lose the cohesive elements of human relationships. A nation that has lost its soul is characterised by inept, uncaring leadership which functions by selective allocation of posts, privileges, and resources and by selective application of justice. It is characterised by leaders who, rather than care for the citizens of the country, simply exploit and denigrate them. “

On the presidency’s response to Bishop Kukah, the bishops revealed that, ” Bishop Kukah, in his patriotic and frank presentation called attention to some verifiable data and statistics about the Nigerian situation on that privileged international platform. He spoke for authentic Christians and Muslims who are under persecution. No doubt, he intended to solicit the support of that forum which many Nigerians believe holds the promise of some assistance and relief from our current national crises.

” The Federal Government however has characteristically gone up in arms against the person of Bishop Kukah and his purpose. It is commonly said that when there is a problem in a democracy, more democracy is needed to solve it. Sadly enough, our current federal government does not seem to subscribe to this.”

Reiterating the right of freedom of expression as stipulated in the constitution, the bishops said for the sake of the nation’s democracy must be protected and that the attempt by the National Assembly to amend the press council bill is aimed at gaging the media and it should be rejected by the citizens.

” We declare again, as we have done often in the past, that only the truth can set us free. Nigeria must allow this to happen! The attempt of the Nigerian National Assembly to silence the press and penalize journalists for merely doing their job is to be completely rejected. We hold that the freedom of expression is a fundamental human right, guaranteed by the constitution, and cannot be alienated by any government least of all in a democracy.

“For the sake of our democracy, that right, exercised with responsibility, must be protected. We support Bishop Kukah in his effort to unveil the truth about the Nigerian situation in order to ameliorate things. We call on the Nigerian government to learn not to see criticism as an attack or a crime,” they said.

The clerics expressed displeasure to the lawmakers for prioritizing the interest of their political parties above the interest of Nigerians on the passage of the amended Electoral Act and the Petroleum Industry Bill (PIB), urging the citizens to challenge the decisions of the national assembly with all available means.

The Bishop said, ” With the national assembly at various occasions prioritizing party and privileges over people’s rights and interest, relief and progress continue to elude Nigerians. Simply put, those who claim to represent the people seem to have perfected the art of sabotaging the progress of their same people.

Indeed, the time may have come for Nigerians to no longer simply roll over and accept non-representative decisions of the assembly but to challenge them by all legitimate means.”