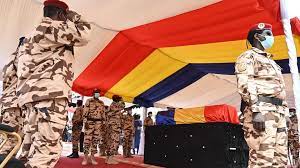 A funeral ceremony for late President Idriss Deby has been held in Chad’s capital, N’Djamena.

Thousands of people paid their respect to the leader who died of wounds sustained while leading his troops against a rebel offensive.

French President Emmanuel Macron and several African leaders were present at the ceremony, despite rebel warnings they should not attend for security reasons.

Macron pledged support for the country’s “stability and integrity”, but also urged his military successors to steer a smooth return to civilian rule.

An important ally to Western nations in the fight against Islamic extremism in Africa, he was fatally wounded this week while visiting the front lines of the battle against the rebels, according to a military spokesman.

Chad’s armed forces stunned the nation on Tuesday by announcing that Deby had died from wounds suffered while leading soldiers on the front line against Libya-based Chadian rebels advancing from the north towards Ndjamena. He was 68.

Deby ruled Chad for more than 30 years and was one of Africa’s wiliest political survivors, holding on to power despite rebellions that reached as far as his palace gates.

After the state funeral and prayers at the Grand Mosque of N’Djamena, Deby’s body will be flown to Amdjarass, a village about 1,000 km (621 miles) from the capital.

The country faces an uncertain future.

Both opposition leaders and the rebels accused of killing Deby say they aren’t happy with what they say amounts to a coup after power was handed over to Deby’s son, 37-year-old Mahamat Idriss Deby, to lead an 18-month transitional government.