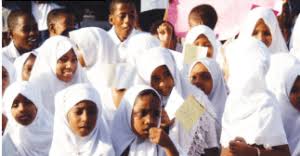 It since the crises rocking Kwara state is far from been abated, in all sense, the issue of Hijab the state government announced a few weeks ago, is given many citizens and resident a great concern.

The recent been the Cherubim and Seraphim Movement Church, C&S Worldwide in the state. The church has rejected the use of Hijab by female student at its college in Ilorin as ordered by the state government.

Chairman and spiritual father of the church, Most Reverend Samuel Abidoye, said the church is against the use of Muslim veil by female student of the school. He said the state government is not responsible for the day to day running of the school, hence, the government lacks the moral right to order the school on what to wear.

He said the management of the institution will decide on the dress code and the use of beret. The church position on the use of Hijab was made know on Sunday in Ilorin while addressing news men.

He said “maintenance of the school has been the sole responsibility of the church, Cherubim and Seraphim College at Sabo-joke in llorin owned by Seraphim Church Worldwide was established in 1969 to take care of the educational development of children.”

The church therefore advised the government to “revisit its decision on the matter to forestall unnecessary trespass capable of leading to breakdown of law and order in any part of the state.”