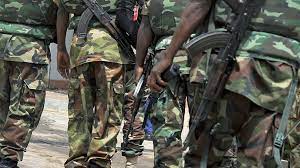 A soldier has reportedly shot dead a Customs officer at Seme border to death, our correspondent gathered that the incident occurred early hours of Thursday.

An eye-witness who gave account of how the incident aroused tension in the area over fear of a clash between soldiers and customs officers at the border.

According to the source who pleaded not to be mentioned, the soldier was suspected to be under the influence of alcohol.

“It’s possible that the soldier was under the influence of alcohol because no one expected him to behave in such a strange manner.”

Seme is a Nigerian community that shares a border with Cotonou, the capital of the Benin Republic.