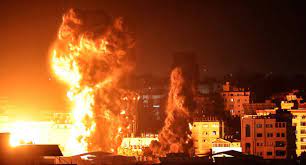 Gaza’s Hamas-run health ministry says 200 people have now been killed there in Israeli strikes since the hostilities between Palestinian militants and Israel began a week ago.

A statement adds that 59 children and 35 women are among the dead, and that 1,305 other people have been injured.

Israel’s military says it has killed more than 130 militants in Gaza.

Ten people, including two children and one soldier, have also been killed in Israel as a result of rockets fired by militants in Gaza in the same period.

Meanwhile, the US has requested “details” and a “justification” from Israel for an air strike on a building in Gaza that housed international media outlets, including Associated Press and Al Jazeera. Human Rights groups including Reporters Without Borders and Amnesty International have asked the International Criminal Court to investigate the bombing as a possible war crime.

US Secretary of State Antony Blinken has said he has not seen any Israeli evidence of Hamas operating in the Gaza building, a claim Israel has given for the strike. Blinken said he has asked Israel for justification for the attack.

He also said the US remains greatly concerned over the escalating violence and is working “extensively” behind the scene to bring hostilities to an end.

The diplomat, speaking at a news conference in Copenhagen, Denmark, urged all parties to ensure the protection of civilians and repeated that Israel has an extra burden to do everything to avoid civilian casualties.

And Italy’s foreign minister has stressed that Israel’s response to rockets fired from Gaza should be “proportionate.”

Italy’s Luigi Di Maio expressed “strong concern” over the escalation of violence between Israel and Palestinians in his meeting with Iran foreign minister Mohammad Javad Zarif, the foreign ministry said in a statement.

Zarif is on a European tour and has been in Rome since Sunday, where he has been meeting Italian and Vatican officials, including Pope Francis, to discuss international issues and bilateral relations.

“Condemning the rocket launches from Gaza and hoping that Israel’s response would be proportionate, he (Di Maio) reiterated the call for the parties to immediately adopt de-escalation measures and show responsibility,” read the statement.

German Chancellor Angela Merkel has called for an end to the violence as soon as possible while speaking with Israeli Prime Minister Benjamin Netanyahu.

However, she expressed Germany’s “solidarity” with Israel in the conflict.

“The chancellor again sharply condemned the continued rocket attacks from Gaza on Israel and assured the prime minister of the German government’s solidarity,” her spokesman, Steffen Seibert, said. “She reaffirmed Israel’s right to defend itself against the attacks.”

The statement added that given the civilian casualties on both sides, Merkel “expressed her hope that the fighting will end as soon as possible”.