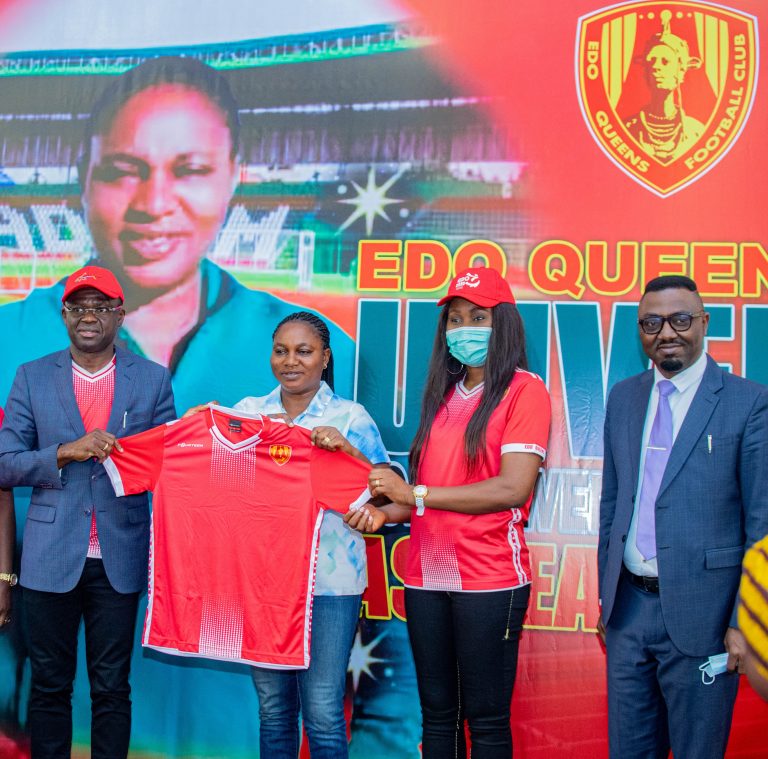 The management of Edo Queens Football Club, on Friday, unveiled Wemimo Matthew as the new Head Coach of the female team, with a charge to return the club to its glory days.

Edo State Deputy Governor, Rt. Hon. Comr. Philip Shaibu, who supervised the unveiling ceremony at the Government House, Benin City, urged the new coach to bring forth her wealth of experience to transform the team.

According to him, “what we have done with Edo Queens was to make it a model for the girl-child to look up to.

“So, we decided to unveil a new head coach because of our performance in the just concluded Super 6. The management immediately said that we need a new coach that can groom young talents.

“Coach Wemimo Matthew is well-educated, with very high discipline, which we are already seeing in the team since her arrival. Some players have already been decamped due to wrong hairstyle.”

Shaibu continued: “She will help us to develop young talents; she is going to work in the 18 local government areas of the state to scout for young talents. We are blending sports with education.

“We are one of the states that have upgraded the female team with the male team. We encourage our players to be good ambassadors of the state; they must strive to be the best. We will support them with all necessary logistics.”

“We are interested in seeing them playing abroad; we are also interested in monitoring their contracts if they are signed to a foreign team. We want to see our players make 80 percent of our national team,” he added.

The Deputy Governor further reiterated that the male team, Bendel Insurance Football Club of Benin, would not participate in the Nigeria National League (NNL) if Nigeria Football Federation (NFF) fails to address the issue between the team and Remo Stars Football Club of Ogun State.

In her remarks, the newly unveiled coach, Wemimo Matthew, thanked the Edo State Government for finding her worthy of the appointment, adding that she was going to make the state proud.

“I am short of words; it’s an honour. This is the first time I am seeing a female team being given such support and attention from the state government. I am very happy to be here; I am going to give my best to the team,” she pledged.