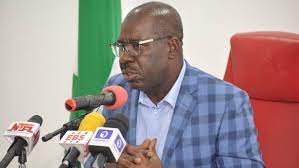 Governor Godwin Obaseki has unveiled the second phase of the Edo Basic Education Sector Transformation- EdoBEST programme under the State Universal Basic Education Board, SUBEB, to ensure that the transformation embarked upon by the State Government in public primary schools is extended to the Junior Secondary Schools and beyond.

This was done at the result sharing session which held in Government house, Benin City as part of activities to mark the third year anniversary of the programme.

Edo Basic Education Sector Transformation- EdoBEST, a programme under the State Universal Basic Education Board was birthed on April 19, 2018 to transform the face of public basic education system in the state.

Three years down the line, SUBEB is having a result sharing session with Governor Godwin Obaseki and relevant key players.

Governor Obaseki describes the programme which has revolutionised primary education as one of the greatest achievements of his administration.
He goes on to unveil the EdoBEST 2.0, adding that the same transformation will be extended to the other levels of learning.