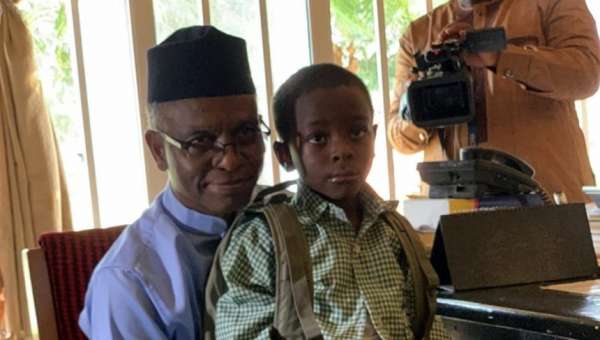 Abubakar Al-Sadiq El-Rufai was a student of Capital School Kaduna by the Governor of Kaduna State, Nasir El-Rufai in the company of his wife in 2019 in fulfilment of his campaign promise to send his son to a public school, many Nigerians had perceived his action as bold and exemplary and a people-oriented governor that was on track to revolutionize public education in the state.

The Kaduna Capital School is reputed as one of northern Nigeria’s oldest government schools.

When the Governor of Kaduna State enrolled Al-Sadiq to Capital School, many people described it as a “Media and Political stunt” to give an impression that he identifies with the masses.

However, the enrolment of Al-Sadiq in public school, received massive commendation from all walks of life.

According to DailyTrust, “the governor has ‘secretly’ withdrawn his son from the school and enrolled him in an undisclosed school, leaving residents’ tongues wagging over his action.”

But when he removed his son from public School, it was not made public, a development interpreted by many as a “betrayal of public trust and confidence.”

Some commentators alluded the Governors U-turn as a result of the  widespread abduction by kidnappers in public schools especially in Kaduna and neighbouring states, or pressure from family, or lack or doubts on the capacity of the government school to groom his son as what obtains in private schools.

People living around the school said they were disappointed that the governor had withdrawn his son few months after the child joined the children of poor and middle class citizens in the state to learn under one roof.

Many thought that the enrolment of his son would be a turning point for the public schools in Kaduna State.

According to DailyTrust, “I am grossly disappointed because the whole enrolment episode looked deceptive,” said Ibrahim Yaro, a resident of Kaduna.

“Leaders should keep respect their words and the promises they take. After the governor has removed his son from the public school, he is now busy increasing fees and sacking teachers…I really don’t understand where he is heading to. Someone should talk to him, please,” he said.

There was no immediate response from the Kaduna state government.