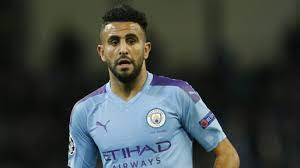 Riyad Mahrez curled in a free-kick as a much-improved second-half performance saw Manchester City come from behind to beat Paris Saint-Germain 2-1 in the first leg of their blockbuster Champions League semi-final on Wednesday.

Marquinhos had powered in a header to give PSG an early lead and the deserved advantage at half-time at the Parc des Princes.

However, City skipper Kevin De Bruyne’s cross dropped in to pull City level just after the hour mark and Mahrez then beat Keylor Navas from a 71st-minute free-kick to complete the turnaround and give Pep Guardiola’s side the advantage going into next Tuesday’s return in Manchester.

After starting so well, PSG lost their way after half-time and had Idrissa Gana Gueye sent off in the 77th minute as a shocking tackle on Ilkay Gundogan earned the midfielder a straight red card.

Having already failed to win at home to Manchester United, Barcelona and Bayern in this season’s Champions League, the Parisians now face an uphill struggle in England if they are to reach the final for the second year running.

It is, then, first blood to Emirati-backed City against Qatar-owned PSG in a tie that is also a battle of competing Gulf nations.

After all the money pumped in by their owners from Abu Dhabi, City are eyeing a first-ever Champions League final, and this was their first appearance in the semi-finals since 2016 when they defeated PSG in the last eight before losing to Real Madrid.

However, PSG can still be optimistic about their prospects after sensational away performances against Barcelona and Bayern in the last two rounds.

PSG coach Mauricio Pochettino is hoping to once again get the better of Guardiola, just as he did when his Tottenham Hotspur side beat City in the quarter-finals in 2019. (AFP)