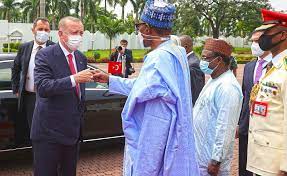 President Recep Tayyip Erdoğan of Turkey says the “terrorist organisation” behind the July 2016 failed coup in his country are operating illegally in Nigeria.

Erdogan, speaking through an interpreter, disclosed this on Wednesday at a media briefing in Abuja.

The Turkish president is in Nigeria on a two-day visit.

Described as a significant event in the country’s history, the 2016 coup in Turkey led to the death of over 200 people, while more than 2,000 other persons sustained injuries.

Erdogan had blamed the “Fethullah terrorist organisation (FETO)” for the incident, and described the failed coup as a victory for democracy in Turkey.

Speaking in Abuja, the Turkish president said his country is willing to offer the necessary support to Nigeria to assist in the country’s fight against insurgency and other armed groups.

“We have been closely monitoring the developments unfolding in Nigeria. The terrorist organisations, the armed gangs, and the marine bandits are continuously active in Nigeria and the Nigerian authorities are continuously fighting against them. In order to cooperate further in the fields of military defence and security, we are doing everything that will be available,” he said.

“On this occasion, I also would like to take this opportunity once again to extend my most heartfelt condolences to our brothers and sisters of Nigeria who have lost their lives as a result of terrorist attacks. I hope and pray that Allah will bestow upon those who stayed behind the utmost patience and strength.

“We are ready to share our ever expanding capabilities with Nigeria, especially in the field of defence industry and security which are being praised by the entire globe. This sensitivity that we showcase in fighting terrorism, I hope will be reciprocated by our Nigerian brothers and sisters and our counterparts.

“The perpetrator of the heinous failed coup of July 15, FETO, is still illegally active in Nigeria. And we are continuously sharing our intelligence with the Nigerian authorities. I hope and pray that our Nigerian brothers will forge a closer solidarity in this field with us.”

He commended Buhari for “having showed us the utmost hospitality”, and also extended his condolences to victims of the recent attack by gunmen in sokoto.