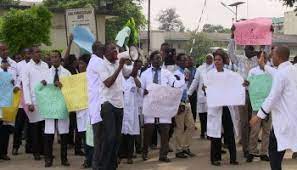 The Federal Government has asked striking resident doctors to resume work as most of the issues they have raised are state affairs.

Minister of Health Dr Osagie Ehanire told journalists in Abuja on Thursday that seven of 12 matters that were raised by the National Association of Resident Doctors (NARD), were the responsibility of state governments.

Consequently, he expects the resident doctors to resume work on Friday and take up these issues with the state governments rather than embark on the nationwide strike as they had done.

This is more so, according to him, because the Federal Government has started addressing the five issues it is responsible for.

Resident doctors in Nigerian public hospitals started a nationwide strike on Monday, for several reasons including delays in the payment of their salaries and allowances.

The strike coincided with a spike in COVID-19 cases in the country, leaving many worried that it could have serious consequences for the battle against the third wave of the pandemic.

Dr Ehanire shared the concerns in his briefing on Thursday, telling journalists that the industrial action was crippling the government’s efforts in tackling the resurgence of the pandemic.

Defending his position on the strike and the call on the doctors to resume, the minister said the Nigerian Constitution clearly spelt out the responsibilities of all the tiers of government.

As far as the minister is concerned, resident doctors employed by the Federal Government had no basis for joining the strike in the first case. This, he explained, is because they are not being owed.

The doctors had insisted that they had no choice but to opt for the strike at the start of the action.

They argued that the government never hold talks with them until they take drastic action.

“Usually there is no negotiation done until we go on a strike,” said the President of the Association of Resident Doctors at the National Hospital in Abuja, Dr Akanimo Ebong told Channels Television on Monday.

The resident doctors had gone on strike earlier this year, suspending the action after 10 days on April 10.

They are unhappy with what happened after that.

“We never called it (the strike) off, we only suspended it to give time for negotiations. But since we called off the strike on April 10, barely anything has been done,” Dr Ebong said.

The latest strike followed a meeting of the National Executive Council (NEC) of NARD in Umuahia, the Abia State capital.

Issues raised by the medical practitioners include the immediate payment of all salaries owed to all house officers, including March salaries (regardless of quota system) before the end of business on March 31.

They are also asking for an upward review of the hazard allowance to 50 per cent of consolidated basic salaries of all health workers and payment of the outstanding COVID-19 inducement allowance, especially in state-owned-tertiary institutions.