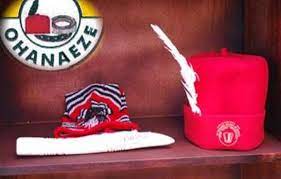 The Ohanaeze Ndigbo has reacted to the arrest of Yoruba activist, Sunday Igboho in Cotonuo, describing it as an evidence that the Federal Government had the capacity to end terrorism and banditry.

The group took the stand in a statement on Tuesday by Mazi Okechukwu Isiguzoro, the Secretary-General, Ohanaeze Ndigbo Worldwide.

He said the clear and “endless pampering of Boko Haram insurgents, bandits, and killer herdsmen is the route that will surely bring catastrophe to the North and will be a great threat to the corporate existence of the country.”

He added that “the interceptions of Sunday Igboho and Nnamdi Kanu signify that those who promote the consciousness of Nigerians are detained while the terrorists, bandits, and killer herdsmen are furnished with cover-ups by Northern leadership to destabilize the South for their heinous political purposes.”

Ohanaeze claimed that it appeared that the arrest and detention of the two secessionist agitators was a clearance for the prospective onslaught of Fulani herdsmen and terrorists to occupy strategical forests of Southern Nigeria and wreak havoc.

“We, therefore, call for the unconditional release of the “Prisoners of Conscience”, Mazi Nnamdi Kanu and Sunday Igboho, as there is no evidence on the ground of possible arrests of Northern terrorists and bandits who have abducted school children, maimed Southern Nigerian farmers, and murdered security agents.

“Nnamdi Kanu and Igboho are not murderers, they should be released without further delay,” the Igbo group demanded.