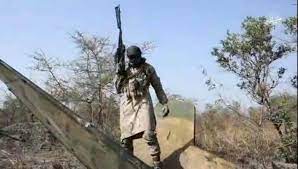 The Nigerian fighter aircraft that went missing few days ago, footage has been showed by a faction of the dreaded Boko Haram, showing the sects fighter’s carrying Rocket Propelled Grenade, artillery equipment, the corpse of the pilot and the aircraft’s debris.

HumAngle website shared screenshots of the crashed jet, both mid-air and on the ground, on Friday via its Twitter page.The NAF Alpha-Jet was deployed for an operation against the Boko Haram sect, in a bid to raid the area of the Islamic insurgents.

The Nigerian Air Force (NAF) Alpha-Jet was On Wednesday, confirmed by the military that the aircraft went off the radar.  without a trace, and all effort to carry out a comprehensive trace proved abortive.

The military aircraft, lost contact with the base few minute after taken off, the same day, and the aircraft was said to have been on interdiction mission, to give the ground troops support.

There was a report by some villagers, who claimed they saw the jet fly around Goni Kurmiri and Njimia villages after attacking terrorist locations around the Sambisa Forest.

The country has been left to speculate on the outcome of the fighter’s jet, the speculation in some quarters, has it that Boko Haram, who is believed to possess sophisticated weapons, might have shot the aircraft down.

Meanwhile, the search for the remains of the craft was hindered by bad weather, which was initiated shortly after the disappearance, has reported by an intelligence source.

On Thursday, the nation’s Chief of Air Staff, Air Marshal Oladayo Amao flew to Maiduguri over the incident, to make sure, a proper search is conducted, to savage the situation.