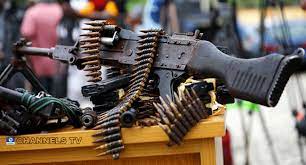 Gunmen have abducted the General Manager of a filling station situated in Isan Ekiti, the home town of Governor Kayode Fayemi.

The Police Public Relations Officer in the state, Sunday Abutu confirmed the abduction to Channels Television on Friday, adding that the operation was carried out by close to 10 gunmen on Thursday evening.

According to Abutu, the abductors took a bush path with about six motorcycles and started shooting sporadically before whisking the victim away.

The State Police Command said it has deployed a rescue team to ensure the release of the victim and the arrest of culprits.

A similar incident occurred in January when a popular petrol dealer in the state was kidnapped at one of his filling stations in Ado, the state capital and later released after about seven days.