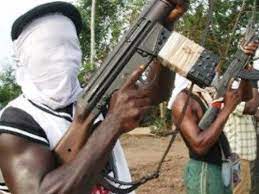 Gunmen suspected to be bandits have killed one person and kidnapped two nationals of the Republic of China in Taraba State.

The incident was said to have taken place on Monday night at a mining site at Arufu community in Wukari Local Government Area of the state.

Mr David Misal, the Police Public Relations Officer in the state, confirmed the incident to Channels Television via a telephone interview on Wednesday.

He gave an assurance that the police were on top of the situation and have already begun a manhunt for the fleeing bandits with a full-scale investigation ongoing.

The command spokesman noted that two abducted foreigners were staff of a mining company in the state.

He added that several others who sustained various degrees of injury while scampering for safety have been taken to various health facilities within the community for treatment.

The said community is a boundary town between Benue and Taraba States and has been in the news for attacks arising from mining activities in the area.

According to the Police Public Relations Officer, no contact has been established with the abductors to know what their demands are.

This incident comes after weeks of no reported case of kidnap or attack and counter-attack in the area.