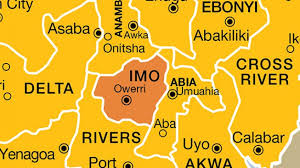 According to sources in the community who spoke to Channels Television, the attack took place in the late hours of Friday when people had gone to bed.

The attack was accompanied by long hours of sporadic gunshots in the community, generating panic among residents.

Community members said they noticed that the courts and police station had been set ablaze on Saturday morning.

The police station was still under construction and no lives were reportedly lost.

Some calm have returned to the community with the presence of security operatives, residents said.

Later on Saturday, the police confirmed the attack.

“Upon the receipt of the complaint, Police Special Forces were deployed to the scene,” a statement signed by police spokesperson, Bala Elkana, said.

“The Commissioner of Police Imo state, CP Abutu Yaro, fdc has ordered a full investigation into the incident and directed that no stone should be left unturned until the perpetrators of such heinous crime are apprehended and made to face the full weight of the law.”

Late Friday’s act of violence is the latest in a series of attacks targeted at government facilities in Imo state and in the south-east region generally.

The region is home to a secession movement championed by the Indigenous People of Biafra (IPOB), which has been proscribed by a Nigerian court.

IPOB, which is seeking to create a Biafra nation, has ordered a sit-at-home directive on Sunday in respect of south-easterners which died in Nigeria’s deadly civil war.

Markets and businesses have also been mostly shut as Imo state residents fear an outbreak of violence.

The Imo state government and the police have urged residents to disregard the sit-at-home directive and go about their lawful duties, as all measures have been put in place to ensure the adequate protection of lives and property.