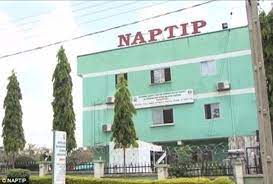 As part of its efforts to sensitised and enlightened the people of the hinterlands in Edo State against Human Trafficking and Irregular Migration, the National Agency for the Prohibition of Trafficking in Person ( NAPTIP) in collaboration with the International Organisation for Migration (IOM), recently in Benin City Flagged- off ” Blue Bus Public awareness campaign.

The ‘Blue Bus’ Public sensitisation campaign which is a travelling expedition and expected to be used to spread the world against Human Trafficking and Irregular Migration according to the Organisers will be going round 10 Local Government Areas of Edo State in the next eight (8) weeks .

Speaking at the event, the Director-General of NAPTIP, Senator Basheer Garba, represented by Mr. Hakeem Lawal, said the ‘Blue Bus Campaign is an initiative of NAPTIP and IOM to stern the tide of human trafficking and irregular migration.

On his part, the Chief of Mission, Frantz Celestine, represented by the Senior Project Assistant, Mr Aigbeze Uhimwen,said the blue project which commenced in 2018 is funded by the Government of Switzerland and implemented by IOM in collaboration with NAPTIP .

He said that the project is to raise awareness against human trafficking and irregular migration in the State, disclosing that: “This is the phase two of the project as we have done some works in Abuja and Lagos state”.

Addressing newsmen at King-Square in Benin City, venue of the Flag-off a, the Zonal Commander, NAPTIP, Benin Zonal Command, Barr (Mrs) Chidiebere Oruruo-Ifudu, said Human Trafficking and Irregular Migration are Cankerworms that has eaten deep into the fabrics of the society, hence, the need for the agency in Collaboration with IOM to enlighten the people on the inherent dangers in the scourge.

“This is the first time this kind of public awareness campaign is being done in Edo State. It is called the “Blue Bus” Awareness Campaign. The essence is to take sensitisation and Public enlightenment to endemic areas.

Barr.Oruruo- Ifudu who maintained that her agency is not against migration especially when it is done the right way lamented over the years, lot of people have died in the Mediterranean Sea and Desert in a bid to travel abroad.

She advised parents to engage their children in skill acquisition in order for them to be gainfully employed aside going to school.

“We promote safe Migration and the message for this bus is if you must travel you must travel the right way. Shine your eye is the symbol of the Blue Awareness Campaign and it says you should not allow yourself to be deceived”.