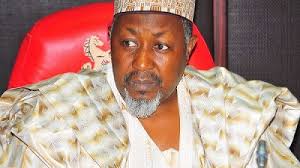 Governor Muhammad Badaru Abubakar of Jigawa has cleared the air on why he invited the People Democratic Party and the Sokoto Governor, Governor Aminu Waziri Tambuwa, because they do politics without animosity.

The governor made this known at the official commissioning of the newly built 744 housing estate in Dutse, in the state capital. He made this clarification amidst some allegations that the governor is planning a secret move to the People democratic party, or the governor. Governor Muhammad Badaru Abubakar is secretly working for the People Democratic Party PDP.

The governor has face a fierce confrontations on his reason of inviting an opposition party to come and commission a project in his state despite their ideological differences.

“People have been asking me why Tambuwal? I asked them is Tambuwal not a good man they replied NO.

” I then replied to them that, in Jigawa we do our politics with fear of Allah, respect for elders, friendship, and togetherness, respect of achievement we do politics without bitterness.

“We give credit where the credit is deserve ,so we do that to Tambuwal because he deserved it.

“We have come together for a very long way, is not about party, and is about friendship and trust in one another.

Governor Aminu Waziri Tambuwal thanked the governor for inviting him to commission the projects he commend the Jigawa Governor for the laudable projects that is gear towards taking the people of Jigawa out of infrastructural deficit, which has eluded the state for a very long time.

He further clarified the air on why he was invited, he said people should not always look at the party’s rather people should watch out for what they have to offer to the people that will be of great benefit to the overall development of the state.