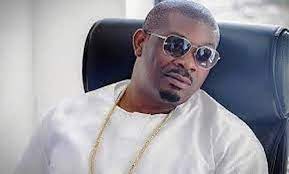 Micheal Ajereh, also known as Don Jazzy, has come out to reveal his marital status. His single status has been a hot topic of discussion for a long time.

Don Jazzy, has been regarded in the entertainment circle as the most eligible bachelor in the country, he over the years has manage to keep his love affair from the general and prying eyes of the media.

Overtime, he has not been romantically linked with any lady anywhere, this prompt, many young and eligible lady to have gone on to social media to ask the music producer to marry them. There have been rumor over the years that the talented music producer is in love with international singer, Rihanna.

In a twist of event, Don Jazzy said on Saturday, revealed that he got married at the age of 20, to American model and author, Michelle Jackson, about 18 years ago According to the Mavin Records boss, the marriage failed because he devoted his time to music and neglected his family.

The Mavin Records boss, shares some pictures from his wedding, on his verified social media, “For so long, everyone kept asking me when am I getting married? Well, the truth is that almost 18 years ago, I was 20 and I got married to my best friend, Michelle (@yarnstaswitch), and it was beautiful. I loved love and I loved marriage. Michelle is so beautiful inside and outside with such a soft heart. But then, me being so young and full of dreams, I spoilt it because I was giving all my time to my music. Music became my priority, instead of my family. We got divorced when I was 22 and it hurt. I am still very much in love with my music and I would not want to marry another (person) and mess it up again. So, I’m taking my time. Why am I just saying this now I really like to keep my relationships private, actually. Past or present. But I was watching the Bounce interview with Ebuka which is almost like a tell-all interview, and I felt bad skipping this huge part of my life. So yes, you all should not be annoyed.”

Shortly after his ‘confession’ several fans bombarded the social media pages of Don Jazzy and Michelle, begging them to give marriage another shot. However, Don Jazzy revealed that Michelle had remarried and has a son.

One thought on “I don’t want to mess up marriage again, after my previous marriage failed –Don Jazzy insist.”