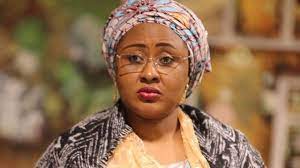 Wife of President Muhammadu Buhari, Aisha, has said that she speaks against the current government because of her passion for good governance, insisting that telling the truth as she sees it is important.

She disclosed this in her biography written by Senior Special Assistant to the President on Administration and Women Affairs, Daji Sani, which was launched on Thursday at the Presidential Villa Abuja. In the biography, Dani Sani wrote: “A woman of Aisha’s status — a wife of about three decades, a mother and grandmother — does not stand to ‘criticise her husband publicly.

“When asked about the reason for her outburst, she clarified that she did not mean to disrespect anybody but was only expressing the truth expected of her. She added that she held such views because those around her husband were frustrating the mandate given to him.”

The book further described the first lady as “frank and straightforward”, adding that for her, “telling the truth as she sees it is important.” “From her point of view, this is not criticism, but a call for people to do the right thing; that is, to incite positive policy change.

“By speaking the truth, she hopes to touch the sensibilities of those in charge and inspire them to corrective action.”

The book, titled, ‘Aisha Buhari: Being different’, also offered insight into how she was married to Buhari as a teenager and her reaction to the president’s comment that she belongs to the kitchen.

“In 1989, the young lady, Aisha Halilu, got married to Muhammadu Buhari, a retired Major General and former military Head of State of Nigeria…Aisha, like any other girl-child married as a teenager, faced the challenges of adapting to womanhood.

“She married the kind of man any woman would want to associate herself with, a highly placed and responsible man….Married at an early age, for her, the future seemed unsure,” ,” the book stated. Speaking on early marriage, the First Lady in the book said: “In many villages in northern Nigeria, educating a girl is not considered a priority. In fact, early marriage affects every eighth girl.

According to UNICEF, one in seven girls is reported to give birth by age seventeen. The easiest justification for this practice is that it serves as a strategy for reducing the burden on the family.

“It is also viewed as a way of protecting the sanctity of the girl-child. Another report shows that child marriage occurs more frequently among girls who are the least educated and poorest, and who are living in rural areas.

The above scenario was the kind of social-cultural background that Aisha was born into and raised. Married at an early age, for her, the future seemed unsure”.

On the statement by President Buhari during an interview with the BBC that the wife “belongs to my kitchen and the other room (in an apparent reference to the bedroom),” the biography noted that Aisha “never contested the statement or queried her husband”.

“This is vintage Aisha Buhari. Married for decades, she understands her husband’s mindset and sense of humour, a side of him that the public may not see or appreciate.

“However, that ‘controversy’ did not in any way discourage her from regularly and consistently intervening on national issues, particularly concerning party politics and governance,” the biography added.