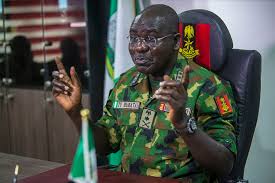 The immediate past Chief of Army Staff, COAS, Lt Gen Tukur Buratai was full of gratitude at the handing over ceremony to Major General Ibrahim Attahiru, he used the occasion to review to the general public on how he was almost retired 21 years ago.

Buratai, said he was almost retired from the Nigeria army by the former president Olusegun Obasanjo about 21 years ago, at the rank of major,

He said his attainment of the rank of Lieutenant General and Chief of Army Staff is a thing that he will forever cherished.

In his word, Buratai said “Former President Olusegun Obasanjo almost retired me 21 years ago when I was a Major. My retirement after 40 years of service is historic, hence, calls for gratitude”.

Few days ago, recalled Buratai along side his colleague resigned as service chiefs. The action prompted President Buhari to appoint a replacement of the outgoing service chiefs.

The newly appointed service chiefs has long assumed their new responsibility, were the president reminded them of the state of the nation as regards the insecurity that has bedeviled the nation.