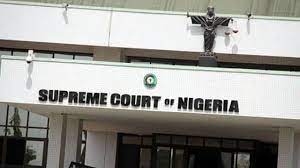 In a petition reportedly filed by the All Progressives Congress APC, on the Imo North senatorial bye-election, against the Supreme Court. The highest court in the land has come out on Thursday to respond to the petition.

The Governor of Yobe and the Chairman of APC, Mia Buni allegedly accused justice Abdul Aboki and two other Judges of plotting to subvert justice in the matter.

Justice Musa Dattijo Mohammed made the petition public during court proceedings on Tuesday.

In a rejoinder on Thursday, Supreme Court Information Director, Fesus Akande, stated that the name of Aboki was not included.

Akande said Aboki “was never mentioned…even though he is on the panel of five Justices hearing the appeal that resulted from the election”.

Noting that Bunu has denied the petition, Akande told litigants and politicians to “be guided by good conscience and decency in all their conducts especially when a case is before a court of competent jurisdiction”.

The spokesman added that Supreme Court Justices work assiduously to promote the rule of law, impartial and seamless dispensation of justice and “do not deserve orchestrated mudslinging”.