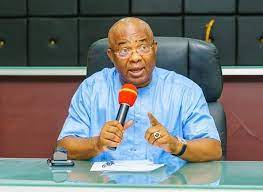 MEMBERS of the Imo State House of Assembly elected on the platform of the Peoples Democratic Party, have accused the Speaker, Paul Emeziem, of acting on a script prepared by Governor Hope Uzodimma in an attempt to silence the opposition.

They levelled the allegation at a press conference at the state PDP Secretariat in Owerri, on Monday.

Minority Leader of the House, Anyadike Nwosu, who spoke on behalf of his colleagues, accused the Speaker of undermining democracy in the state.

Nwosu said his suspension and that of five other colleagues by the Speaker made “a mockery of our democracy.”

Nwosu said, “It is a statement of fact that Rt Hon Paul Emeziem since his emergence as the speaker of the house of assembly has been under increased pressure to silence any voice of dissent in the assembly.

“His intolerance to opposition voice has become legendary in the annals of the Imo state House of Assembly.”

Assembly. His desire to reduce the assembly into a mere appendage of the executive arm has propelled him into the most bizarre action of claiming to suspend us on the more bizarre and stranger allegation of undemocratic practice, a term alien to any parliament anywhere in the world.

“Since his election, Hon Emeziem has ensured that robust debate and regular sittings by the house have become a thing of the past. The house rules have been consigned to the waste bin.

“For the avoidance of doubt, the house rule of the Imo state of Assembly and indeed any democratic institution insists on fair hearing, if indeed, a member is caught behaving or acting in a way unbecoming of a parliamentarian.

“Country to the unattainable, porous and infantile explanation of Mr Emeziem, the truth is that he has been under pressure by the governor, Senator Hope Uzodinma to continue to hound us, intimidate and persecute us for failing to cross over to the APC.

But the Senior Special Assistant on Print Media to the governor, Modestus Nwamkpa, asked the aggrieved lawmakers not to drag the governor into the politics at the state legislature.

He said Uzodinma was “busy correcting the ruins of various past PDP administrations inflicted on the people of the state.”