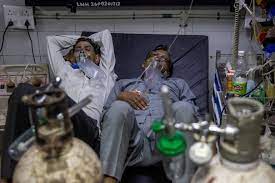 India has reported a global record of more than 314,000 new infections as a brutal second wave of coronavirus cases sends more sick people into a fragile healthcare system critically short of hospital beds and medical oxygen.

The infections added in the past 24 hours, mostly attributed to a so-called double mutant variant, raise India’s total past 15.9 million cases since the pandemic began.

A large number of hospitals are reporting acute shortages of beds and medicine and are running on dangerously low levels of oxygen.

The New Delhi High Court on Wednesday ordered the government to divert oxygen from industrial use to hospitals to save people’s lives.

“You can’t have people die because there is no oxygen. Beg, borrow or steal, it is a national emergency,” the judges said responding to a petition by a New Delhi hospital seeking its intervention.

The government is rushing oxygen tankers to replenish supplies to hospitals.

India’s Health Minister Harsh Vardhan said on Thursday that “demand and supply is being monitored round the clock.” He said in a tweet that to address the exponential spike in demand, the government has increased the quota of oxygen for the worst-hit seven states.

Lockdowns and strict curbs have brought pain, fear and agony to many lives in New Delhi and other cities.

In scenes familiar across the country, ambulances are seen rushing from one hospital to another, trying to find an empty bed. Grieving relatives are lining up outside crematoriums where the arrival of dead bodies has jumped several times.

In recent weeks, the government has come in for criticism for holding packed political rallies for local elections and allowing a Hindu festival which millions attended.

This week, Modi urged state governments to use lockdowns as a last resort and asked people to stay indoors.